DevOps is a software development method designed to build, deploy, and operate applications. It helps team members be more efficient to build, testing, and release software. It aims at improving collaboration between Development teams and Operations teams by emphasizing automation and communication.

DevOps is a cultural shift and a set of principles, processes, and tools that help organizations to deliver software faster at scale.

It is not just about automating the deployment process or reducing manual tasks. It’s about changing the way you work with your team members, customers, partners, and other stakeholders.

The goal is to achieve better collaboration between all roles involved in building, releasing, and maintaining software products/services.

DevOps teams can be comprised of developers who write code and automate tests together with operations engineers who deploy these changes into production environments by following processes defined by IT managers.

Other people involved might include product owners, project managers, or testers – depending on what type of organization we’re talking about (for example if your business has no dedicated IT department then testers can also be part of DevOps).

How Does DevOps work?

It is a combination of practices for communication, collaboration, and integration between software developers and information technology (IT) operations professionals.

Improves the quality of software

DevOps teams are focused on continuous improvement, so they’re able to deliver high-quality software at a faster pace than before. Not only do they work hard to ensure that their code is correct, but they also identify and fix problems quickly so that those bugs don’t negatively impact customers.

By integrating automated testing into their workflow, developers can deliver new features faster than ever before. This reduces the time between when an application is ready for release and when it’s released—and as we mentioned earlier, this has many benefits both for marketing (selling more products) and operations (maintaining less downtime).

Many organizations have separate teams responsible for development work on one end and system administration or server maintenance on the other. But with DevOps practices in place, these two sides can collaborate closely together to create better products faster than ever before!

Collaborates between business & IT

With each side working together—rather than separately—both groups benefit from knowing about what’s happening throughout every part of the product lifecycle cycle rather than just within their respective silos.

It’s no secret that DevOps is one of the most important aspects of a company’s ability to scale and succeed. But it’s also one of the most challenging. That’s why we’ve put together this list of our favorite tools, so you can get started on your DevOps journey without having to make all the mistakes we did in the process!

These tools help your team work more effectively, automate processes that would normally be manual, and generally make the whole process of software development more reliable.

Amazon Web Services is a cloud computing platform that gives developers access to a wide range of services and infrastructure. It’s one of the most popular DevOps tools because it helps you to quickly get started with your project, no matter what infrastructure or platform you’re using.

Jenkins is one of the most popular DevOps tools on the market today. It’s easy enough to use that even beginners can get started quickly and easily. Also, Jenkins offers an online marketplace where users can find plugins and extensions for their apps.

Prometheus is an open-source monitoring tool that can be used to monitor and collect metrics from your system or application’s performance. It works by collecting time-series data and exposing it via a web interface or API. Its simplicity and flexibility make it an ideal choice for DevOps teams looking for a tool that can do it all!

Datadog is an application performance management (APM) platform that provides real-time insights into the performance of your applications across any environment—physical, virtual, or containerized—so you can fix issues quickly before they affect customers or operations.

A Vagrant is an open-source tool that allows you to manage virtual machines on a single machine or across multiple machines in a networked environment. It’s primarily used by developers as part of their workflow process when working with containers such as Docker or Kubernetes.

Read More: The Benefits of Implementing DevOps Strategy in a Business

DevOps practices are a great way to help your organization stay on top of the game in terms of productivity and efficiency. Here’s what you can expect from DevOps in 2022.

DevOps is all about automation, from development to testing to deployment and even monitoring the entire process. The idea is that you can automate each step of the process, so you don’t have to spend time waiting for manual tasks such as build approval and deployment approval.

This saves time and frees up your resources for other things like building better products or testing new features.

Collaboration means working together with other teams within your organization/company or even with external entities such as vendors or customers (in the case of software services).

By collaborating with others on different parts of your product development cycle you can take advantage of the unique expertise that each team brings to improve efficiency overall while contributing to faster delivery cycles because they are aware of what each team needs at any given time during production cycles (e.g., testing).

DevOps and Agile are The Perfect Duos

Agile is a method for building software that is based on iterative and incremental development and frequent delivery of working software.

It encourages rapid feedback, which can translate into quicker product releases—and this has given rise to the idea that Agile will be better at helping teams ship products faster than traditional static waterfall methodologies.

It refers to a set of principles and practices that help bridge the gap between development and operations by improving communication between these two groups so that they can work together more effectively.

Read More: Future of DevOps: Top 10 DevOps Trends For 2022 And Beyond

Who is a DevOps Engineer?

In addition to these responsibilities, DevOps engineers can be thought of as “system administrators” because they’re primarily concerned with keeping an application up and running at all times.

As the future of IT continues to evolve, DevOps will be one of the most important areas of focus for IT departments. Its engineers are responsible for bridging the gap between development and operations teams, making sure everyone is working together smoothly.

If you’re looking for a career that will increase your knowledge and improve your skills, DevOps is the way to go. It is an ever-growing industry with plenty of room for growth. The market for DevOps professionals is booming, so there’s no better time than now to get involved in this exciting field!

In this article, we have discussed what DevOps is and how it can help you to deliver better software. If you are looking for a framework that can help you automate your processes more efficiently and reduce the time spent on manual tasks then DevOps is the right choice.

DevOps is a set of practices that emphasize communication, collaboration, and integration between software developers and other IT professionals that enables teams to work together efficiently on high-quality applications at a faster pace than was previously possible.

Why is it called DevOps?

It’s named after both developers and operations. They’re the two groups that are most affected by the change management process involved in implementing this new way of working together.

What is the history of DevOps?

The term “DevOps” was coined in 2009 by Patrick Debois at a webinar hosted by Netflix. It was an attempt to describe how they were using automation to make their workflow more efficient.

Since then, it has become more widely adopted throughout the industry as an industry-standard term for software development and operations teams working together seamlessly on projects.

Why do we need DevOps?

How does DevOps work?

There are different approaches to implementing DevOps within a company.

Some organizations use an automated system to manage changes made by developers during the development process.

Others create a dedicated team responsible for keeping track of these changes at all times so they don’t interfere with other departments’ workflows or processes.

While some companies use both approaches depending on their specific circumstances or needs at any given time.

What is the goal of DevOps?

The goal is to make sure developers can deliver their code faster, which will allow them to focus on new features instead of fixing bugs or dealing with technical debt.

Who should be involved in DevOps?

All members of your team who are involved with creating or running software should be part of the DevOps process.

How does DevOps help me get what I need to do faster?

DevOps reduces bottlenecks by increasing communication across teams, so everyone knows what’s happening at every step of the process.

It also eliminates time spent waiting for tasks to finish before starting new ones by streamlining processes into one streamlined workflow.

If you want to know more about how it works, then connect with us for a free consultation.

What are some examples of DevOps in action?

How does DevOps differ from IT Operations?

While IT operations once focused on keeping systems running and monitoring performance, It gives them more responsibility.

They’re expected to collaborate with other teams and share their expertise regarding how applications are built and deployed.

They also need to be able to monitor performance in real-time, rather than relying on historical data.

What industries use DevOps?

DevOps is used in many industries, including finance, retail, healthcare, and government.

Kuntal is currently working as Sr. Technical Writer at OneClick IT Consultancy. She is an experienced writer, who adapts to learning IT-based products, services & solutions. Her area of interest includes research & planning, analysis, strategy building, writing, editing, and proofreading. 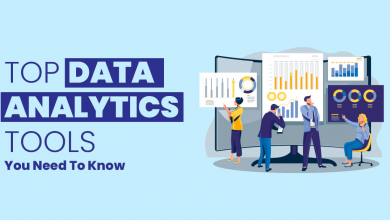 Top Data Analytics Tools You Need To Know in 2023

What is Data Analytics? A Complete Guide in 2023

What is Data Visualization? A Complete Guide in 2023